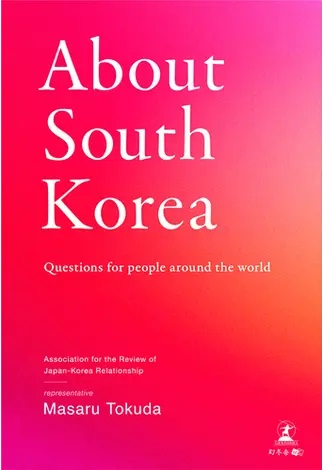 About South Korea / Questions for people around the world

Why Japan invested enormous amount of Japanese tax money and funds to
actively promote the modernization and development of Korea?

The case of wartime laborers, compensation for comfort women, dispute over the
Liancourt Rocks (Takeshima / Dokdo)... the anti-Japanese activities in Korea seems to
become more and more violent for the last few years.
For the better understanding of Korea, here we would like to review Korean history and
candidly show the points about which we regularly have questions. We would ask people in
the world to judge whether this belief is correct.
«about the author»
In 1938, Masaru TOKUDA was born in Japan, as the second son of a fallen soldier.
After graduating from a technical school, engaged in research & development,
manufacturing and sales of industrial machinery equipment. Also, engaged in corporate
management for a Japanese private enterprise.
Through the business, interacted with people from India, four Southeast Asian countries,
twenty-six provinces/cities of China, Taiwan, South Korea, three European countries and
the United States.
After retirement, lived his life at the fullest. But concerned about intense of anti-Japanese
movement in South Korea. Established the “Association for the Review of Japan-Korea
Relationship”, and now works in research about the relationship of two countries.

■About the author
Masaru TOKUDA